For sweet Peyton's nautical nursery, I knew I wanted to make a baby mobile as I had done for her big sister Addy's room.  I learned while planning Addy's nursery that baby mobiles can get quite extensive, so I DIYed Addy's owl & bird themed mobile for her nursery.  I decided to do something similar for Peyton's nursery.  Here is what I came up with & made for baby Peyton's room. 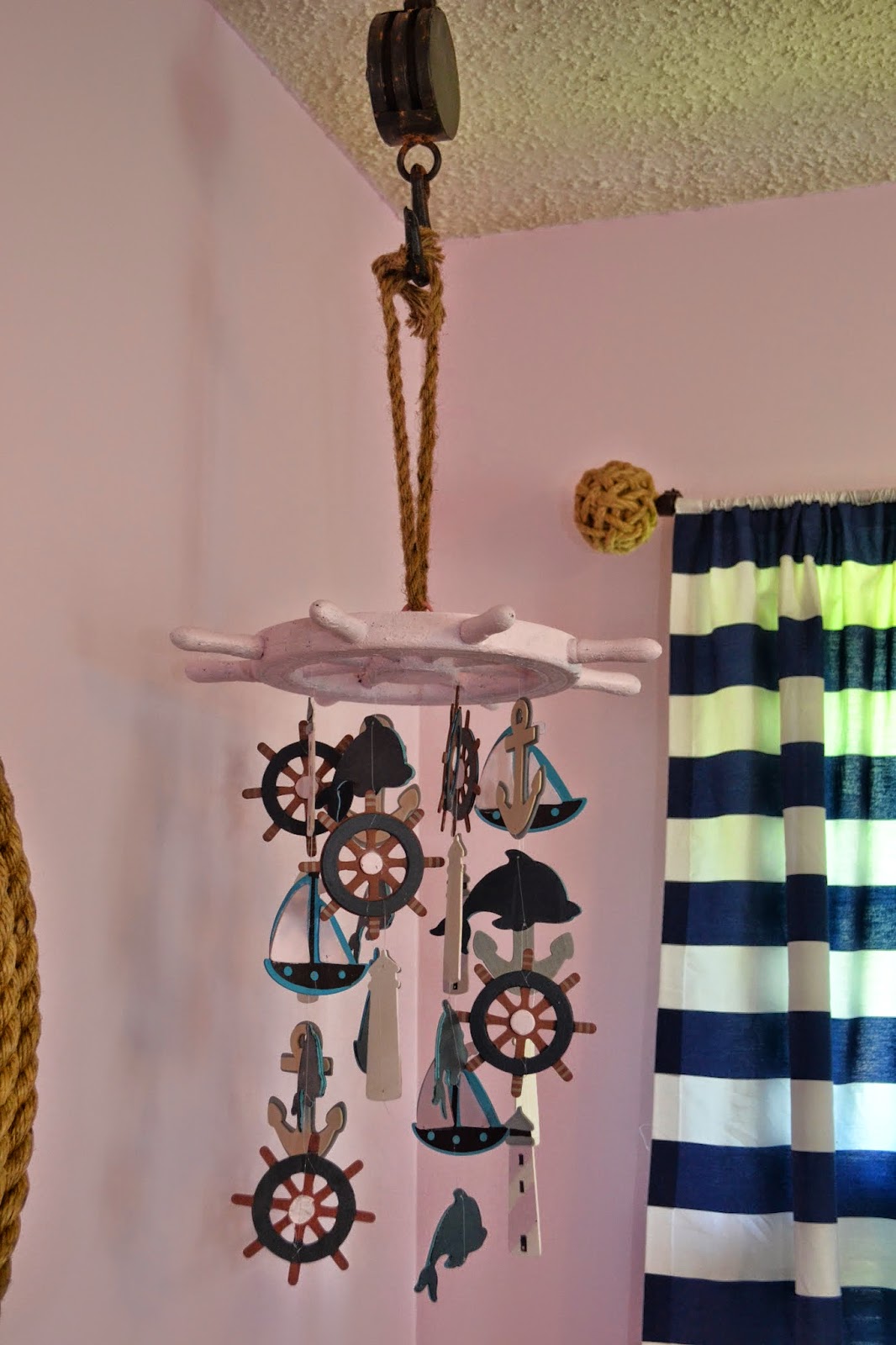 So where did I start?  Well, I had found this awesome nautical hook on sale at Hobby Lobby & knew that I wanted to incorporate it.

So I decided I would hang that from the ceiling. But then what?  I wasn't sure what I wanted to use as the base of the mobile.  I saw some cute ideas on Pinterest where they used life preservers, but I decided that just wasn't the look I wanted.  I saw this great ship wheel (also on sale at Hobby Lobby) & decided that I wanted it.  It had a great rustic look to it, but the coloring was a little off, so I used the same pink that I had used to paint the nursery walls 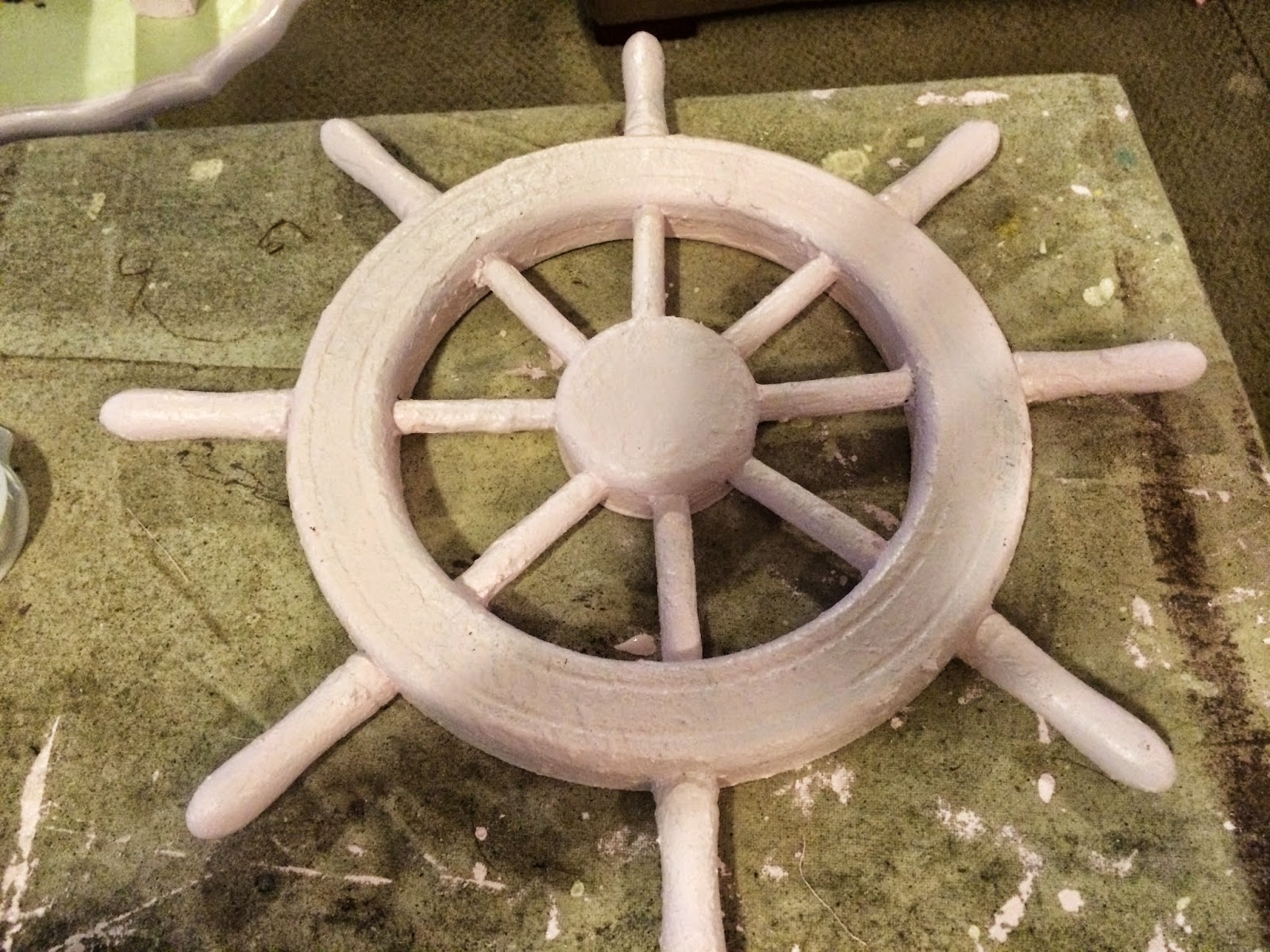 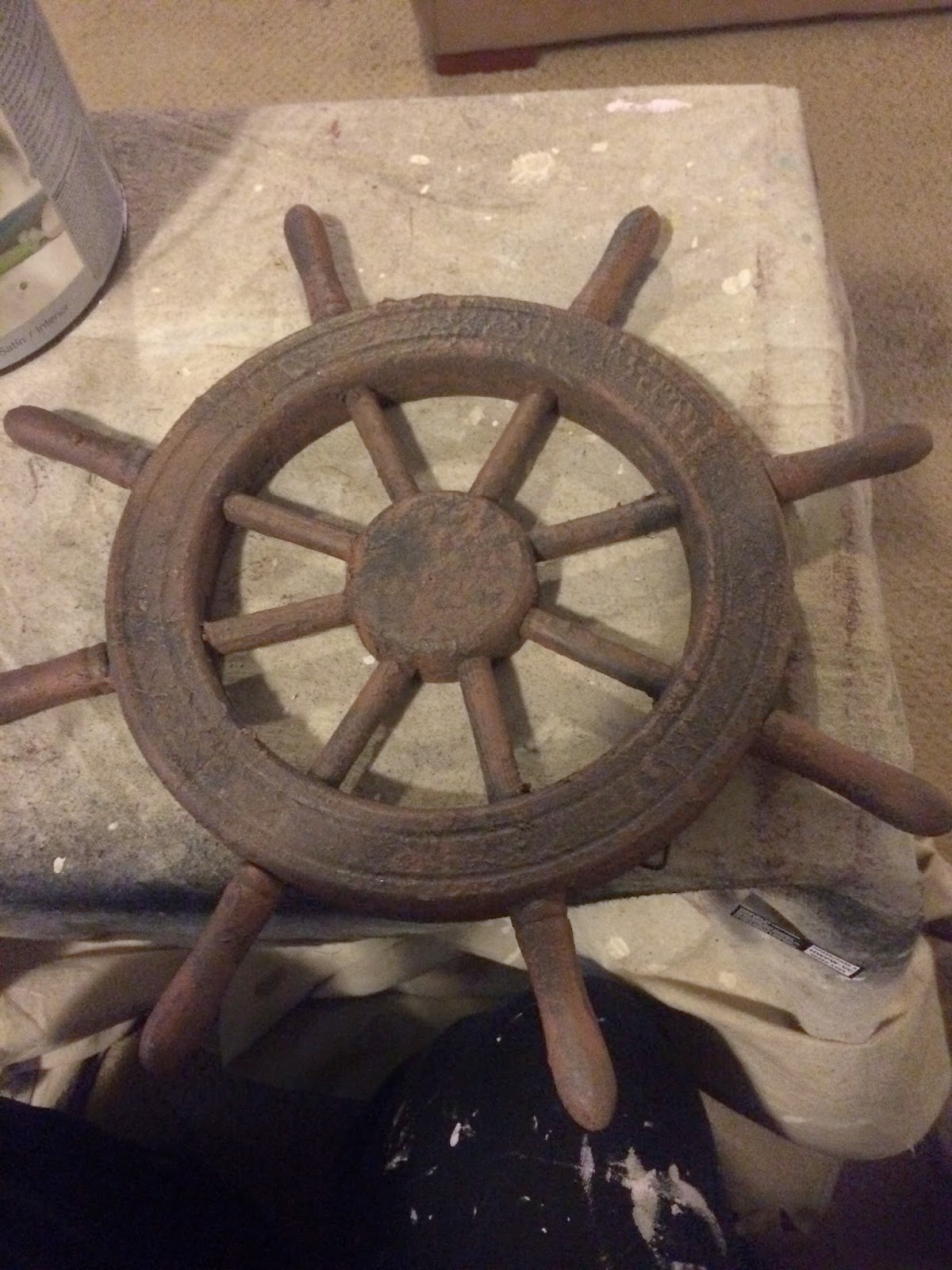 I then went to work on what I wanted to hang from my mobile.  For Addy's mobile, I had cut the shapes out of foam & then scrapbooked over them to make owls, birds & butterflies.  It looks cute in Addy's room since it matches her mural, but it wasn't really the look I was going for here.  I had seen some cute nautical painted wooden shapes at Hobby Lobby & Michaels.  However, they (as many things that are nautical themed) were primary colors. 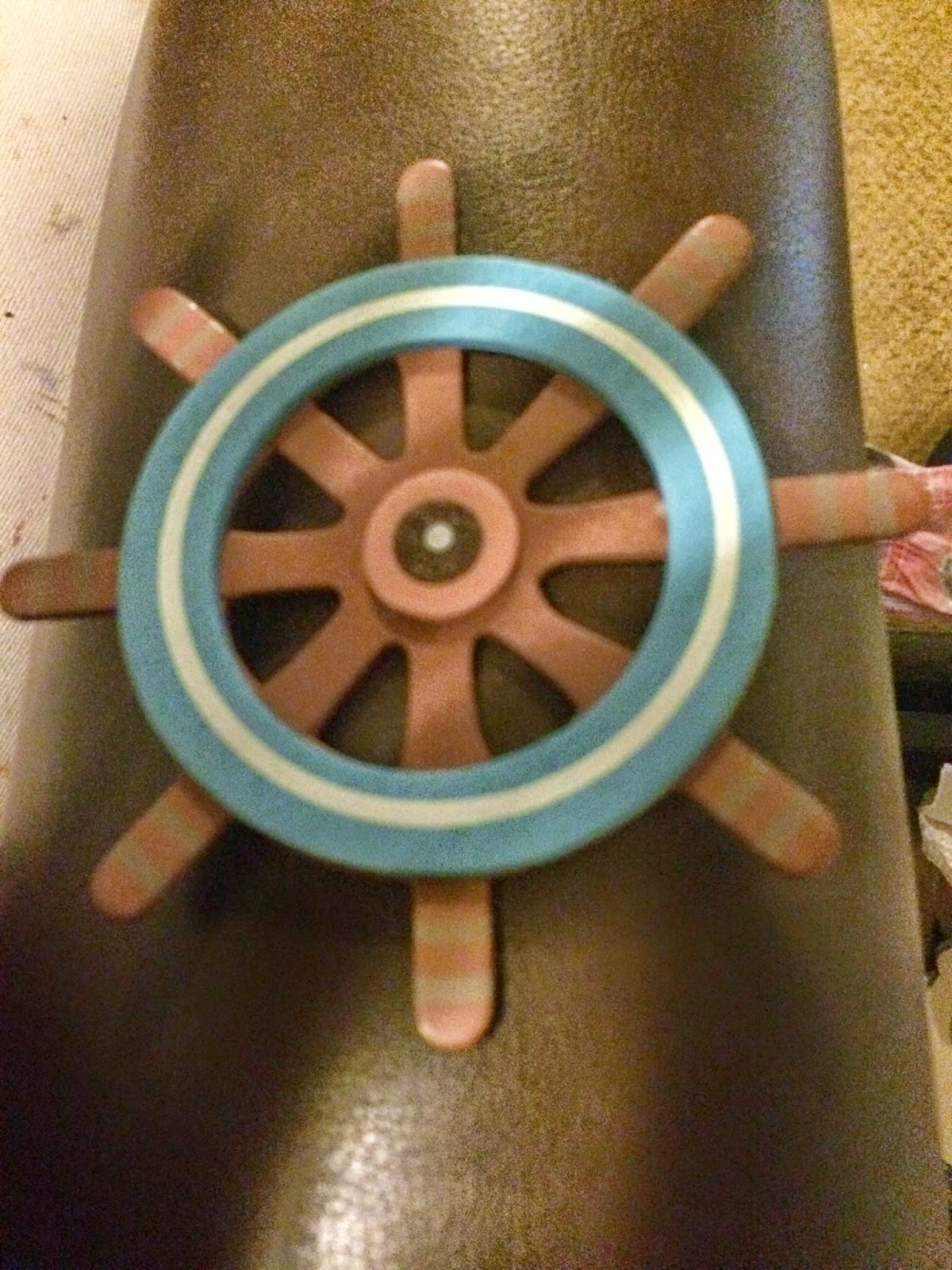 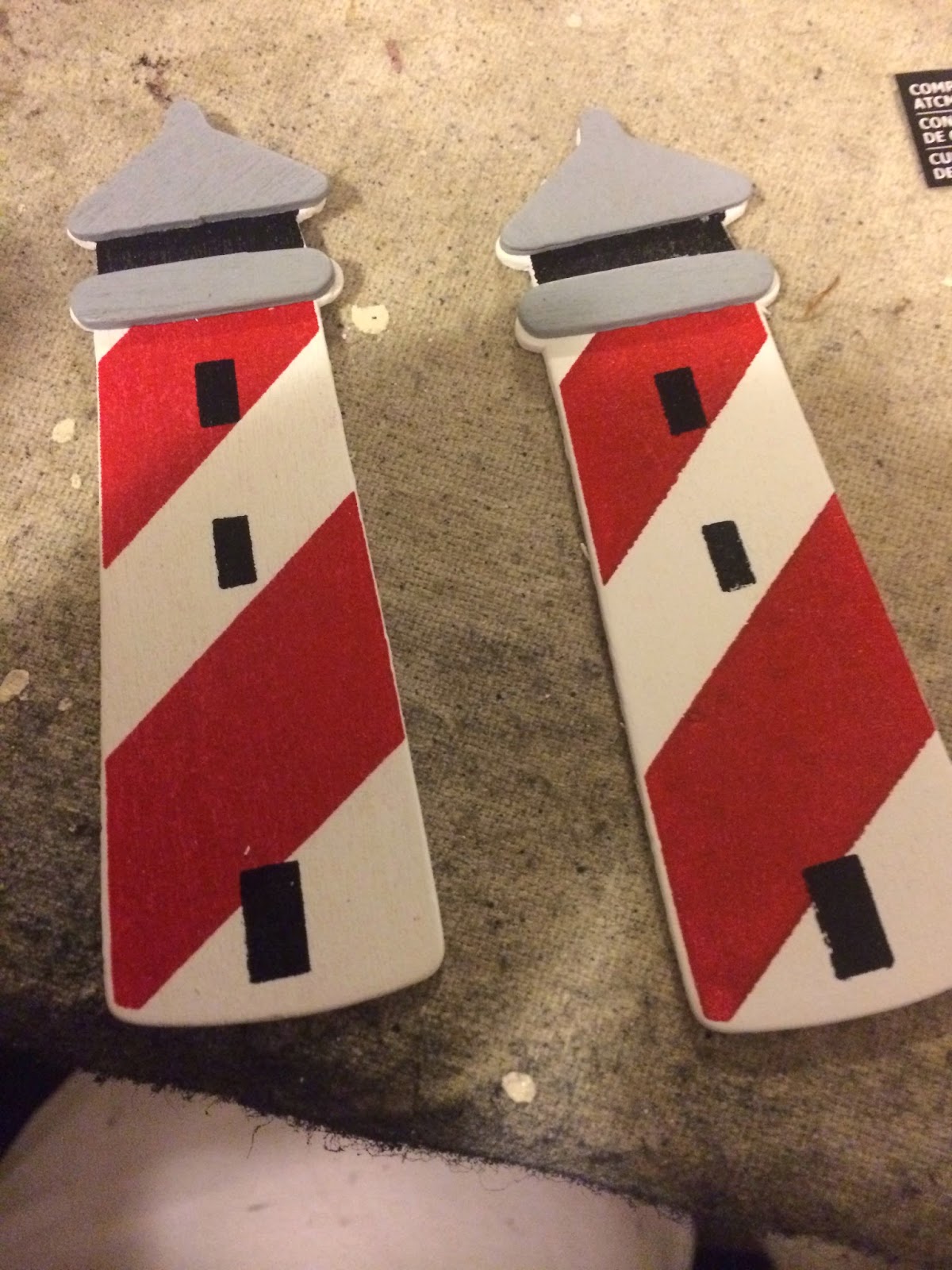 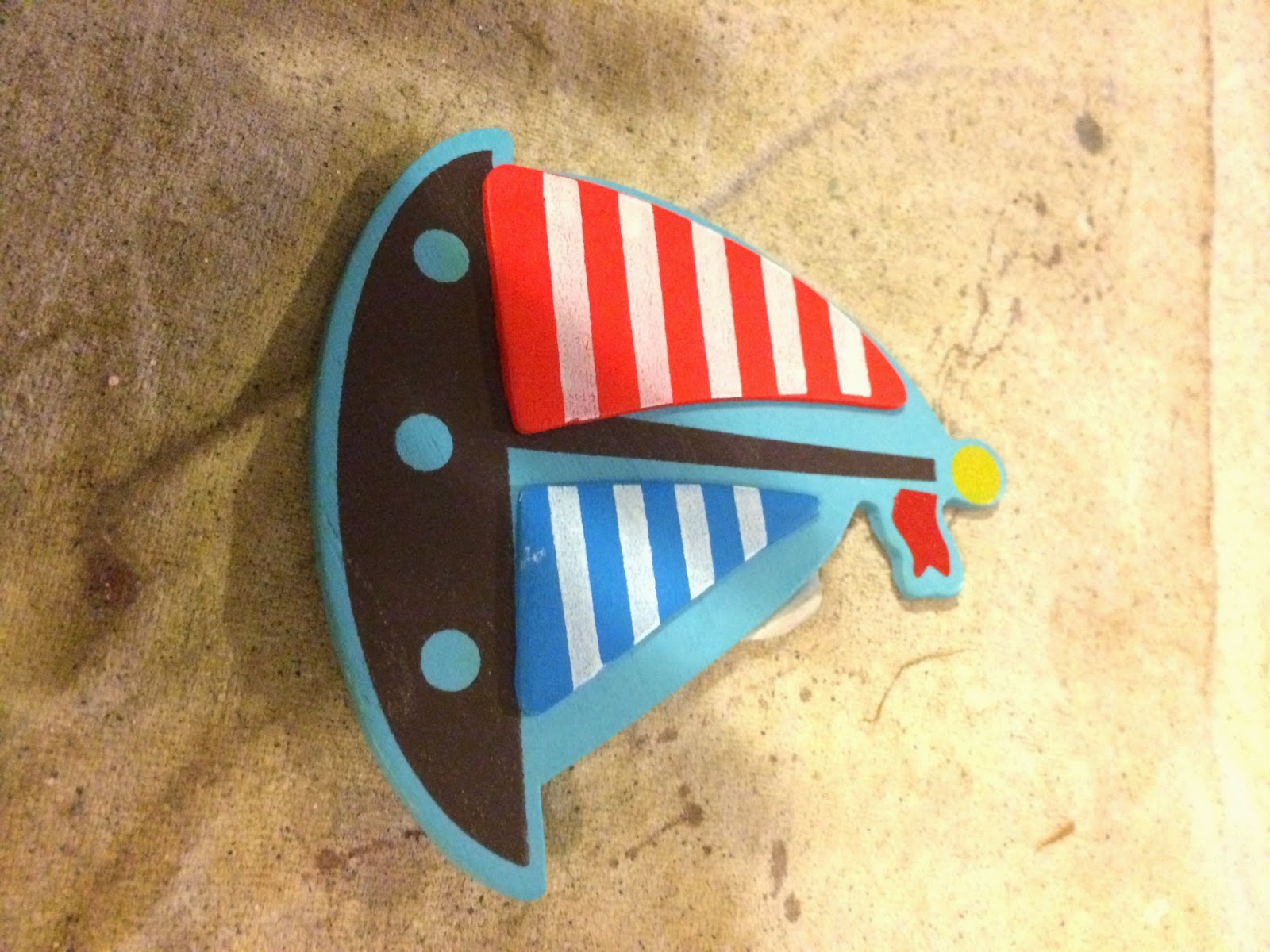 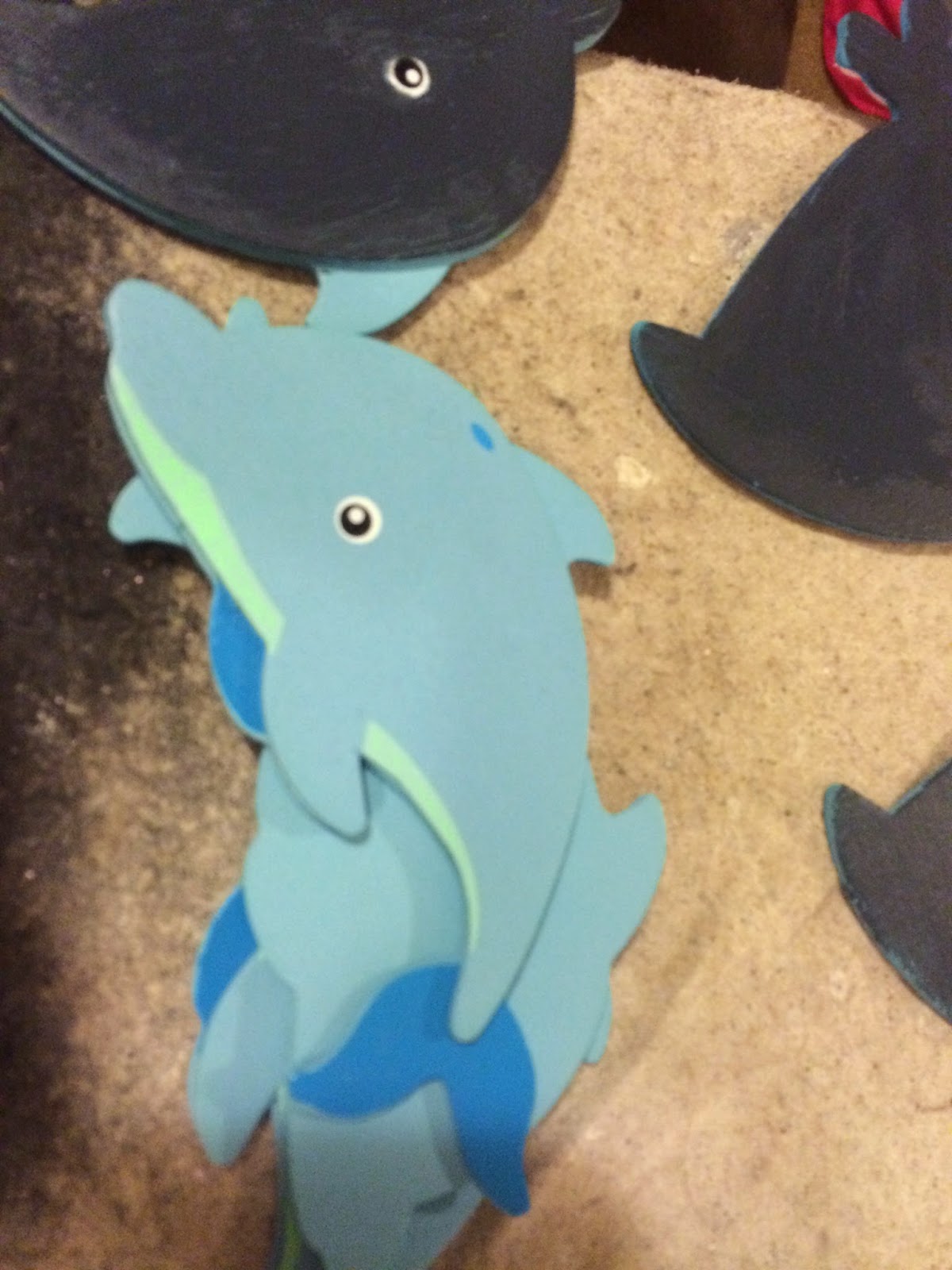 So I decided that I would take the pink that I had painted the walls, the grey I had painted the furniture & a navy that I was going to paint a boat bookshelf & I painted over the primary colors with a tiny paintbrush.  Here is what they looked like after I had painted them.  Much more in the color families of the room.  : ) 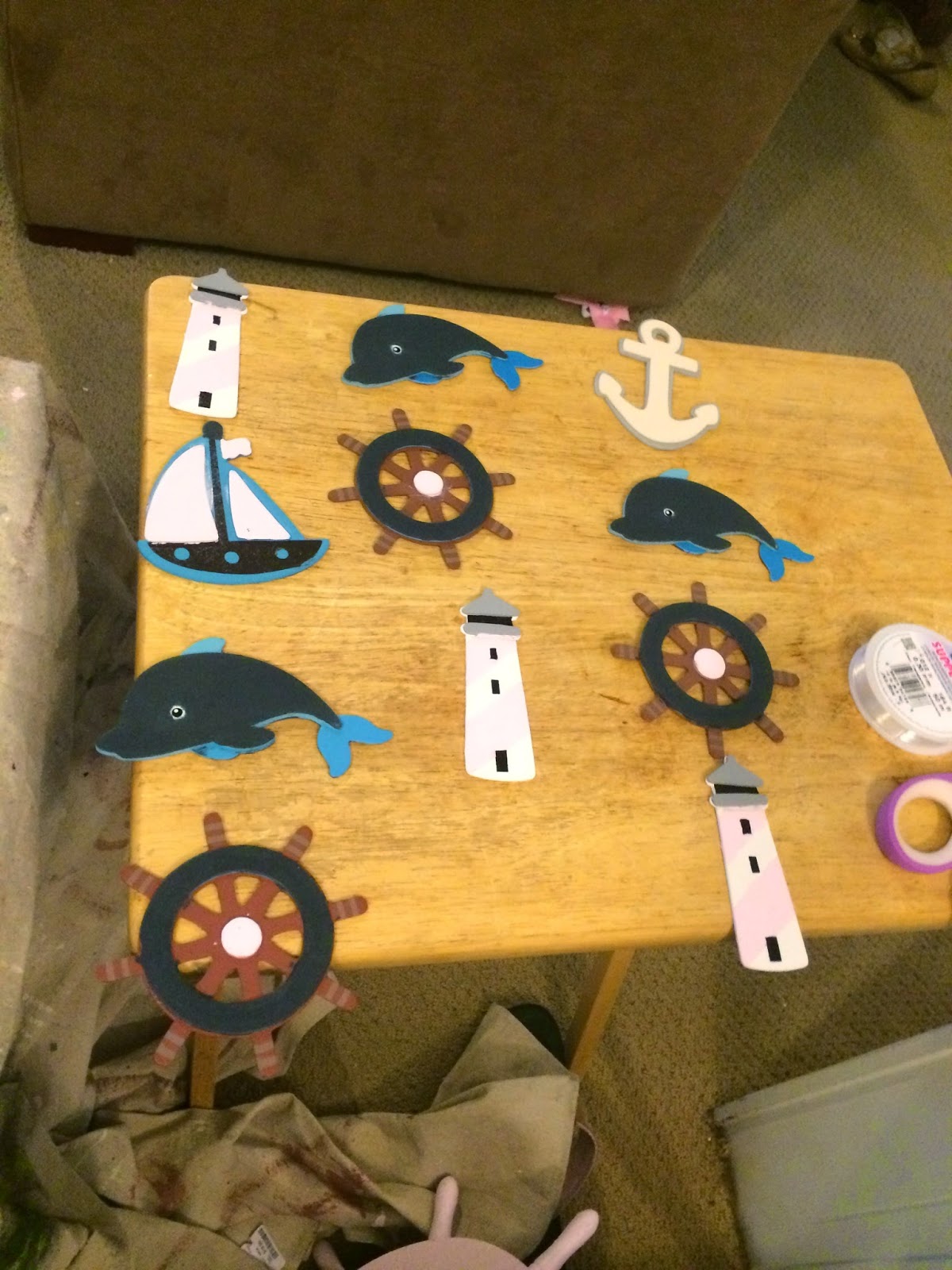 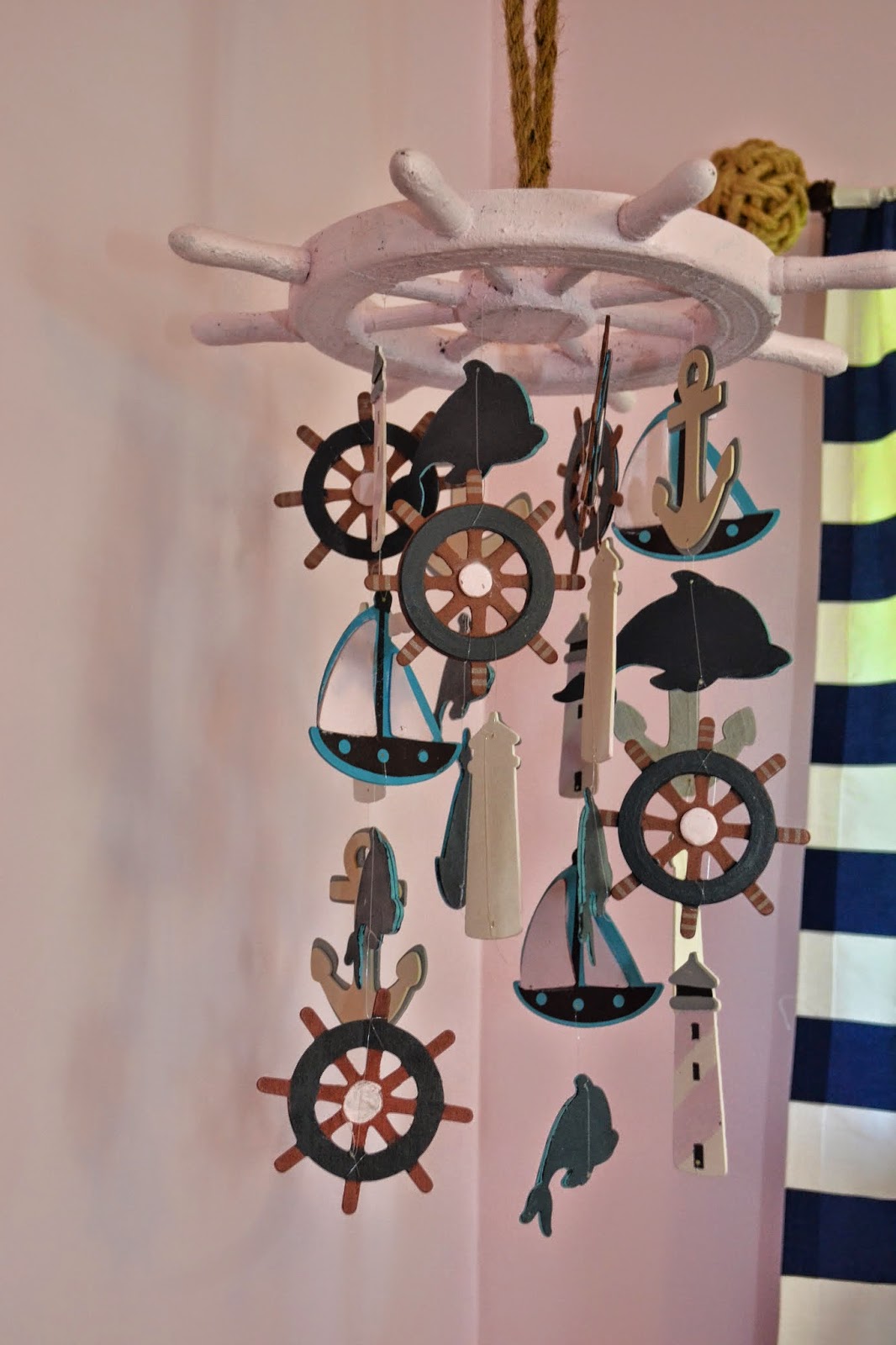 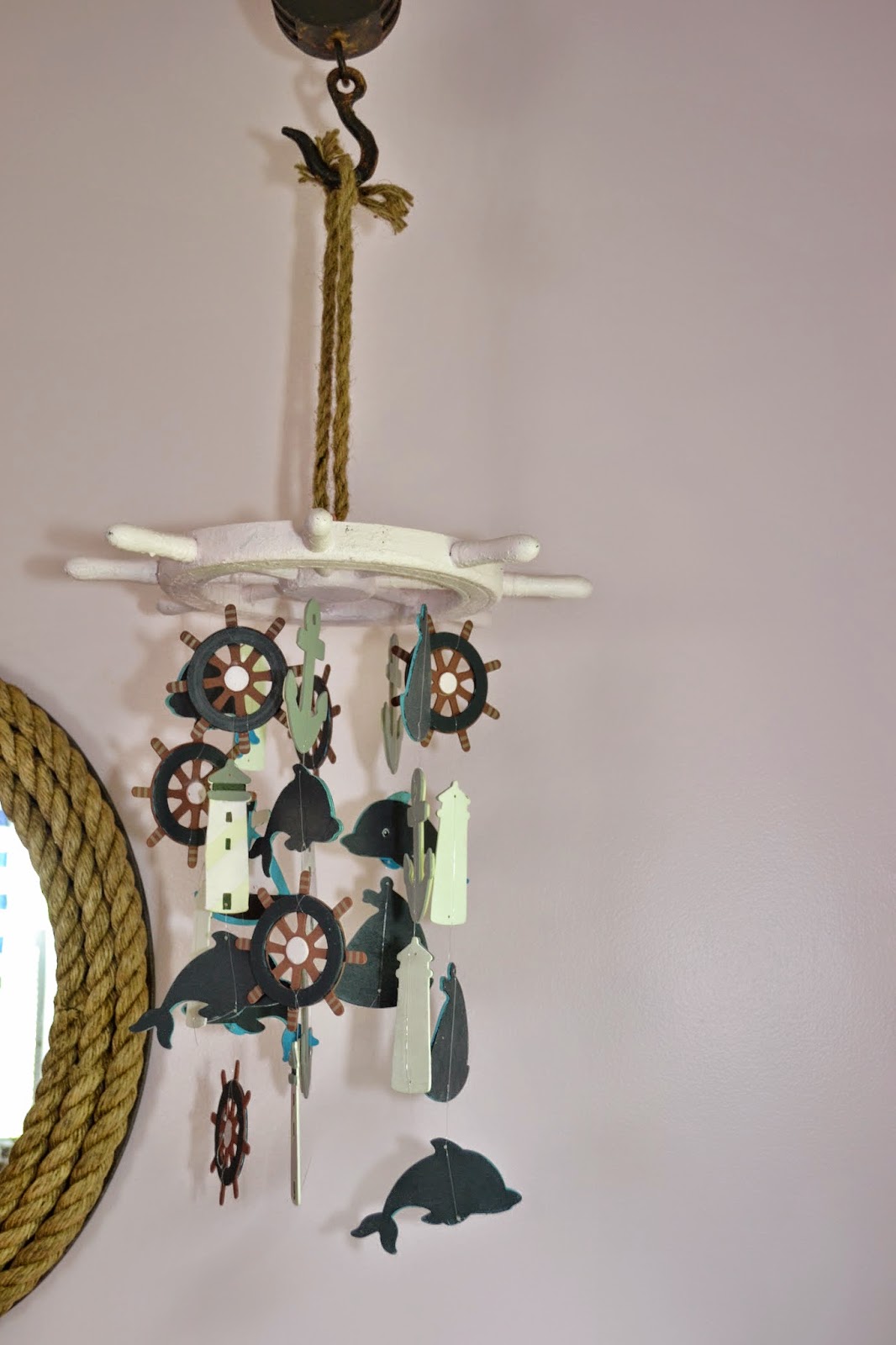 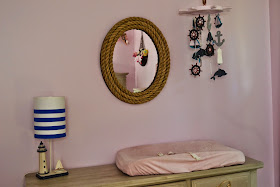 So here is the mobile hanging above the dresser.  It isn't motorized or anything snazzy like that, but I can give it a little turn & Peyton loves it just the same.  : ) 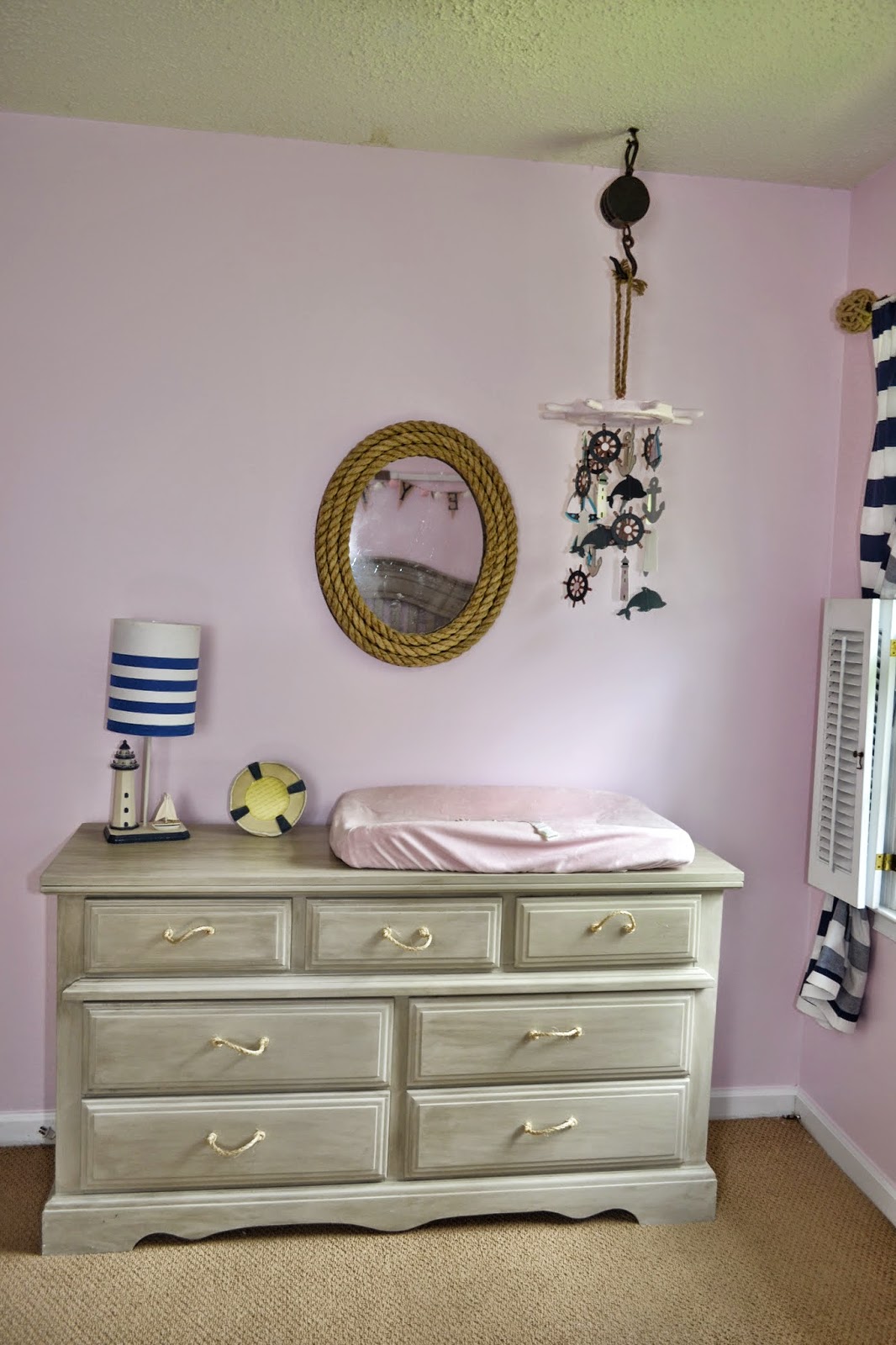